ANOTHER HALF MARATHON RUN AND A NEW TRAINING PARTNER.

Another Half Marathon run and a new training partner.

It has been a busy few weeks, since doing the Insane Terrain race at Doddington, I have been putting in the miles preparing for the Perkins Great Eastern Run which is a half marathon that takes place in Peterborough city centre.I was aiming to set a new personal best time and get below the 2hr time mark. As I had recently completed the Grunty Fen Half in 1hr 1min, I knew I could do it.

Race day was cold, windy and raining. The starting area was partially flooded with huge muddy puddles everywhere. Everyone was keen to get going as it was so cold and wet that standing around was really unpleasant.

Once we started I set off at a deliberately slow pace, I wanted to save myself for the second half of the race. I can’t say the run was particularly enjoyable as conditions were so miserable but once past the half way point I increased my pace significantly. After running the first half so slowly I wasn’t sure I could make up enough time to hit my target but I made a huge effort to sustain the pace and only started to slow again in the last 2 miles as I was almost spent.

Determination carried me across the line in 1hr 56mins.

I was extremely happy with this despite the pain and my sudden inability to walk properly! I knew I had given everything I could. 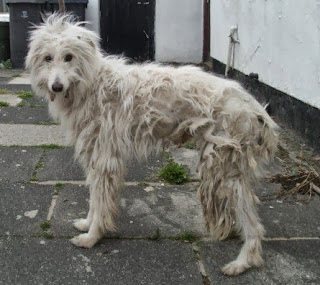 I then had to rush home as I had been negotiating for weeks to get a very special dog from a rescue centre to come and join our family and he was being brought to us that same day. Jasper is a Lurcher who was seized from a traveler site due to neglect and mistreatment. At the time he was seized he was in a terrible condition but the rescue centre has 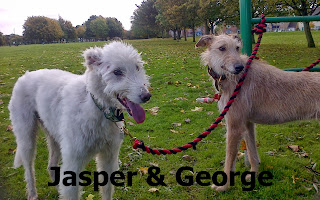 done a lot of work in conjunction with the Vets to bring him back to health.

He now lives with us and our other Lurcher, George. At the moment he has very little muscle but dogs heal fast and with the work I am doing with him on his diet and regular exercise I am quite confident he will be able to do 20km training runs with George and me before the Winter is over. He managed to run 3km yesterday and 4km today so we are seeing some progress already.

My next race is Norwich Half in November, which will mark 1 year since I got off the couch, lost weight and got fit. So I suppose I had better mark the occasion with my first sub 1hr 55mins Half Marathon, better get some miles in!

Good luck with you own fitness goals.